Portugal is a country that will occupy your heart and stimulate your soul, beyond the warm smiling faces, colourful houses and fascinating crafts; there lies a rich legacy from a glorious mix of celtic,roman and moorish cultures along a captivating  coast line.

The sun is always up and heated, whereas the water is not for the faint-hearted. The atlantic ocean temperature in Portugal ranges between -2 and 9 degrees in summer, may be a little warmer or cooler in different times of year. 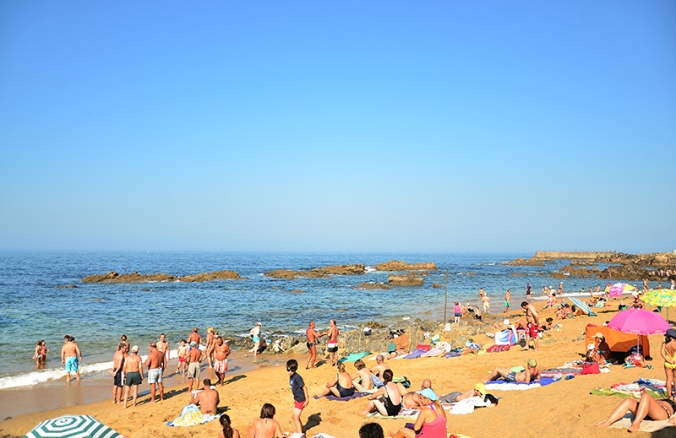 A beach in O’ Porto in August, very few have the courage to swim there…Ambient temperature around 38 C, water temperature below ZERO.

The beaches are sandy, rocky and mostly beneath a cliff, from Porto to Algarve, many locations mark the starting point for explorer trips and the Portuguese empire quest to expand the world.

Porto and Lisboa in Particular are not all open to the sea, the Douro river splits Porto, so you need to go  beyond the borders of the city, and in addition to its status as a grand trade port, Porto’s landscape is fascinating.

By the Tagus river side…

River Tagus is running across Lisbon, bridges are vital to the city traffic, specially the most famous and longest in Europe; Vasco de Gama bridge. Thirty kilometres away from Lisbon centre, there is a small town called Cascais that used to be a fishing village, however with its rich seascape and cultural heritage, it’s been converted to a cosmopolitan suburb, that is definitely worth your time. Whether you’d be intrigued by the view of Boca da Inferno, excited by a surfing adventure or just longing to relax on a sandy beach…

Algarve, around 220 kilometres south of Lisbon, is the region where the oranges have a unique flavour that can easily be labeled as “best in the world”,  even egg yolk looks affected by that with its orange tint, the region that used to belong to Andalusia, as Al’Gharb  or west in arabic, currently Algarve in modern Portuguese. 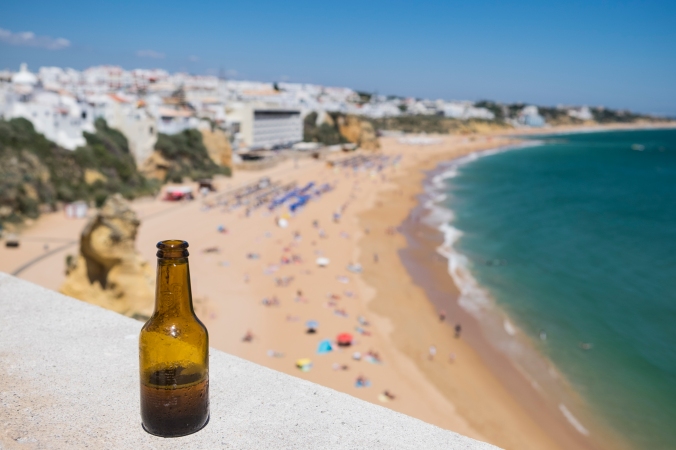 The closest town to Lisbon is Albufeira, used to be a fishing village, as most of the ocean side town were, however except for a couple of locations, all are converted to tourist resorts… Its main central beach is called understandbly fishermen’s beach or Praia dos Pescadores, you’ll find none though all were moved to the new marina. The town is one of two main attractions for beach tourists, it has a wild amount of restaurants and live bars. Around Albufeira, there are also plenty of gorgeous beaches, Praia da Gale, Falesia, Olhos d’agua or water eyes and many more.

On the east, a 100 kms drive from Albufeira will land you in Spain. But in between there are cities like Olhao; a fishing village very close to Ria Formosa, a natural protectorate located on the east coast, and many islands for beach activities. The protectorate extends to Spain, the beach side is  different on the east, no cliffs or many rock formations, it’s just plain sandy beaches on surrounding islands.

Further East from Olhao, there are two beautiful towns; Tavira, the ancient capital, and Faro, current capital. Both are outlined by Ria Formosa, besides the historical sights, there  are two famous islands that can be easily reached; Ihla Tavira and Ihla Deserta. The later specifically is unique in because it’s indeed nearly deserted, there is only one restaurant and maybe a beach bar. However as these beaches are not confined, there’s a bigger risk of exposures to dangerous currents. 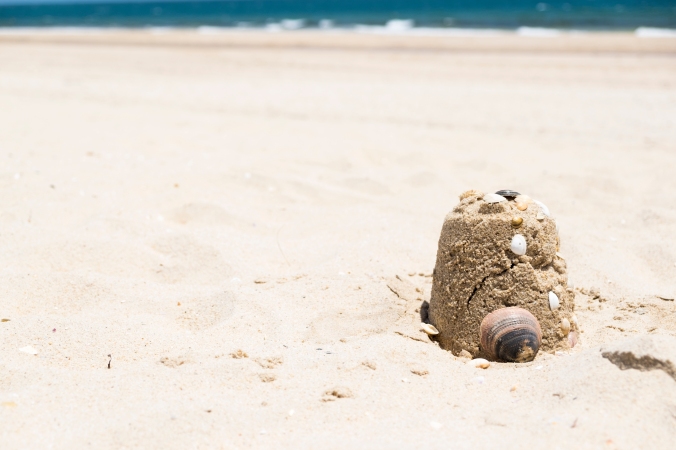 On the west side, beaches are more or less always beneath a cliff. A remarkable town would be Lagos; the second most popular beach resort in algarve, following Albufeira of course. You can start your journey with ponte da Piedade, if you are staying there, there are plenty of gorgeous beaches; Do Camilo (close to ponte da piedade), praia dona ana and Meia praia.

The cliffy, cavey seascape nature makes Lagos special. The town is confined within moorish castle walls, it smells of eagerness and drive to conquer, nowadays, its inhabitants are more relaxed. My boat man Vittor, previously a fisherman, when asked if he wishes a different life for his children, he answered “What else do I need more? I have everything here and now. If school wasn’t obligatory, my kids would be here on this boat. And… O Look! my lunch…” He dipped his arm into the water and caught a fish!! One of the most Bizarre scenes I’ve witnessed. 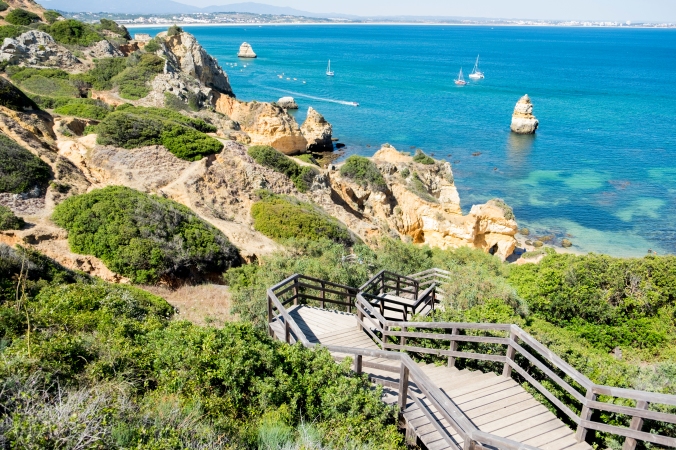 Sagres’s Cabo Sao Vicente was believed to be the most western, southern point on earth, in the old days of ofcourse. The cliff is not to be missed, however the scenery would be always better  with some interesting sunset light.

The town seems nearly deserted at the first glimpse, it’s large relative to the number of inhabitants and tourists combined as well as horizontally spread across the coast, activities are determined based on each beach’s orientation and surrounding. If you are a surfer you may want to pass by a town called Aljezur, around 55 kms north of Sagres.

Between Albufeira and Lagos there is a number of other gorgeous beaches in Portimao and Corvoeiro, Praia da Caravhalo, da Rocha, da Marinha and most importantly the last real fishermen beach in Algarve; Armacao de Pera. 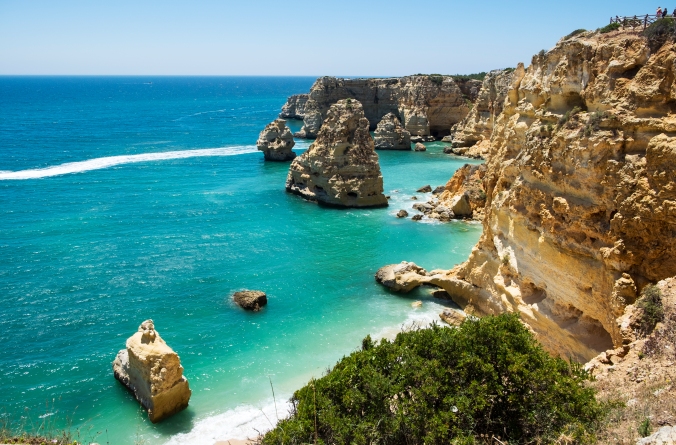 The small village has a lot of buildings relatively, but go catch the sunset with the seagulls on the beach, go early in the morning watch the fishing boats streaming out, and bringing back fish of all kinds and sizes. Buy a fresh catch if you can, chat with the men, most of them were sailors and can speak English. If you are a hardcore foodie, go to Zé Leiteiro; an all you can eat fish restaurant, very cheap relative to the amounts you eat of fresh fish, the staff are as generous and friendly as it gets. 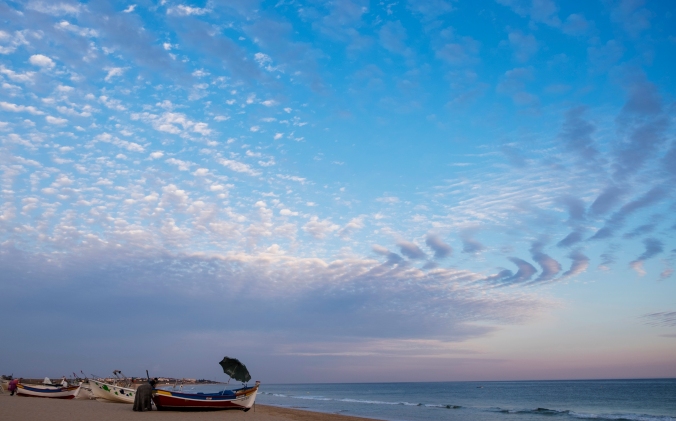 All photographs are my own, copyrights reserved.

One thought on “Along the Portuguese coast line”

There was an error retrieving images from Instagram. An attempt will be remade in a few minutes.

Writing on the World Around Us.