We have arrived to the airport at 10 am, it was of one terminal in size. We were all crammed into one line waiting to stamp our passports, my bladder was willing to explode under the effect of the 3 bottles of wine I had onboard, waiting till we landed was not a good idea. I had to cheat and take the advantage of the amount of  non-chalant people bundled together and managed my way through half of the line, signalling to the other generous half that “I had to go”. The officer wished me happy holidays, of course, most of us are going to be sprawled across one of the Amalfi coast beaches. This fact on its own relaxes your muscles just a little bit more. 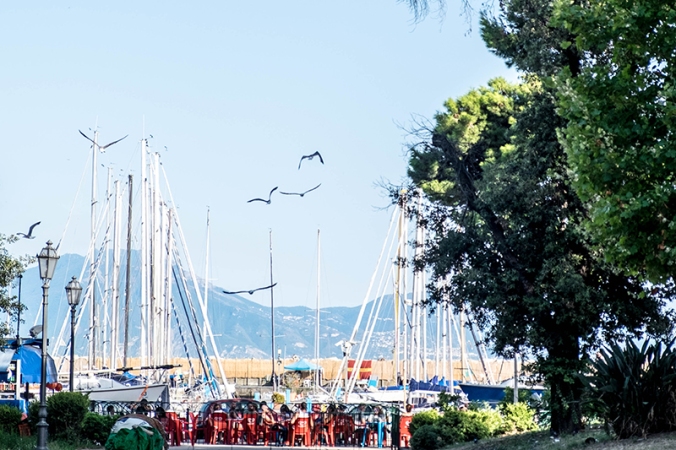 The bus stopped in Garibaldi square, you may have noticed that Garibaldi street and square is almost everywhere in Italy. Giuseppe Garibaldi was a revolutionary who had a special impact on the south of Italy as his conquest enabled the unification of Italy. We have decided to stop for an expresso break at a cafe across the train station that happens to make brilliant neapolitan sweets. Coffee is a cult in Napoli, its inhabitants till not so long ago did roast the beans themselves and ground it to make the perfect most fresh cup of espresso, even when they thought about charity they created something called cafe sospeso. It works as follows; you pay for two and get one, an anonymous later would benefit from it. It was also crucial that Eshpresso would be my first taste of the city, there are few well known neapolitan  coffee houses, my personal favourites would be Kimbo and Toraldo as their coffee is strong and rich in flavour. 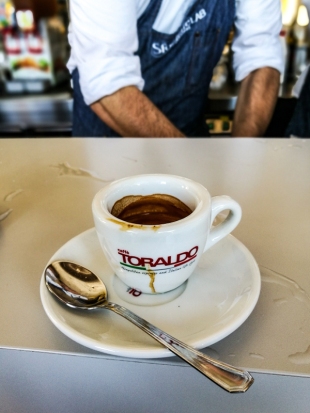 Toraldo Espresso
The second most important taste is a pastry called sfogliatella riccia “Small leaf “ in english, it’s shell shaped and made of layers filled with riccotta with a bit of cinnamon and a tinge of orange or lemon. There are other versions in Campania like for example sfoglia di campania, which is half filled with ricotta as well as other flavours depending; could be chocolate, orange, lemon, strawberry. It’s also worth  mentioning there is another variation of Sfogliatella which is the frolla; exactly the same inside however made of shortbread crust which is pasta frolla instead of the layered sfoglia crust.

Sfogliatella on the inside 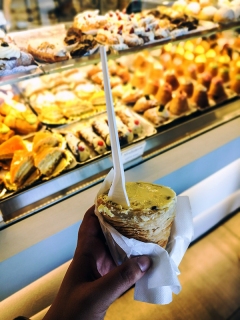 Sfoglia Campania al limone
Our apartment, located in the city centre, took us from the wide streets near Garibaldi square and the train station to the small cobble stone paved streets ”via” and alleys ”vico”;  you’d smell a fresh zest and look up to find laundry hanging between two buildings. You look down to the sides and all you see is open doors, chairs and people staring at you, once you say Buongiorno or Ciao, their faces break into smiles and they would all greet you back. It’s important to get friendly with your neighbours, when your apartment gets flooded they’d be the ones to save you.  You may also wander in those Vici and Vie for ever and you’d always find something new; from what kind of laundry they put out to the small ornaments on their door steps and balconies.

Neapolitans are laid back, they smell good all the time even if at some point all you can smell the sewage in the streets, no worries, it’s only temporary. They are not strictly professional and have higher friendly tendencies than the rest of their fellow italians when it comes to managing businesses. The coffee places is where you hear all the stories, where you get to know what happened to Carlo last night, and try to resolve Lucio’s love trouble. We’d all be involved yet without specific expectations, you pay for your espresso and then leave a sospeso; Girogio is having a rough time these days. This is would be good consolation…

two cooks on a break

La tarantella tunes emanate from the souvenir shops in via san Gregorio Armeno, a southern beat that sounds too familiar to my Mediterranean self. If you have seen the dance you’d recognise the cheerfulness and rhythm of greek Sirtaki and the levant Debke however different individually yet this similarity feels beautiful.

When it’s time for lunch, we’d find a small shop, eat a primo piatto or an antipasto, preferably a pasta with basil and tomato sauce or maybe a light one with garlic, parsley and mussels  always ai denti and as fresh as its ingredients. To digest, we took a long walk across the marina to via Duomo, then down to via san Biagio dei Librai or speccanapoli to melt with the crowd and have some “Gelato” with the season’s flavours. 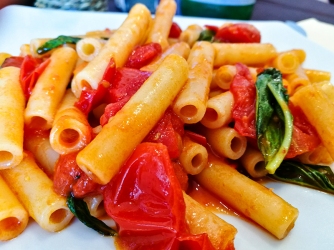 Pasta with tomato and basil
If you are in the mood for some shopping you can walk up and down via toledo but not before you pass by piazza del Gesu Nuovo. There is tourist information centre there next to a water fountain and between two magnificent churches; Gesu Nuovo and Santa chiara, Santa marta is much smaller, however located in the same block. 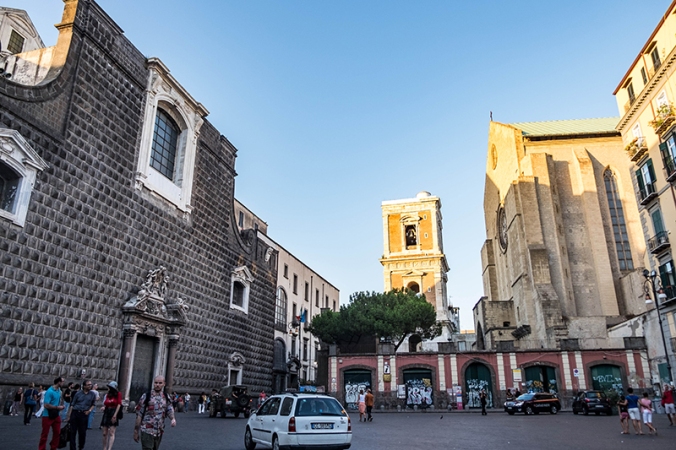 Piazza del Gesu Nuovo, the church on the left, on the right santa Chiara, and the small red building is the tourist information building

Writing on the world around us