Check Rasha in Russia; first article of the  “The world cup diaries” series.

I was warned that the Russian cuisine could be the downside of my world cup trip; they have nothing but tasteless starch and fat. Well, That was partially a big fat lie…There were not a city or a place where I didn’t enjoy my meals whether in a good restaurant or on the streets even the ready made meals in the tiniest train station stalls… It’s also important to understand that beyond the capital and 2 or 3 big cities, Russians are not fans of eating out, it’s always on special occasions and a good restaurant normally costs a lot. Your other option is a bistro or a cafe with less fancy options, however in Saint Petersburg and Moscow there are famous chains that serve what can be considered Russian fast food which is something between street food and easy lunch recipes like Teremok for example.

This is a Ukrainian recipe and some claim it was originated in southern Russian. If you don’t like beetroots then this one is not for you or at least its red version. It’s normally made with potatoes and accompanied with sour cream. It’s true that those are Russian cuisine essentials but creativity doesn’t stop there. 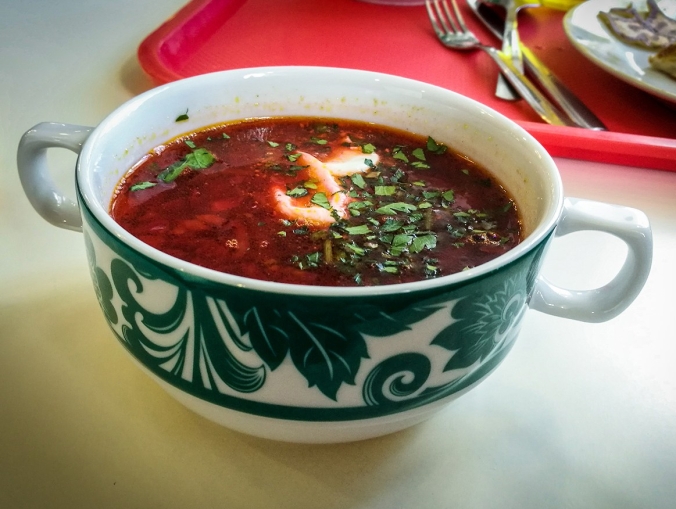 Top soup in Russia, you can have it hot or cold based on beetroots…

A cold summer soup, the first taste you’ll notice is a bitter sweet one of Kvass which is a nearly non-alcoholic beverage made of fermented rye. Other than that it contains raw veggies, herbs, boiled potatoes and eggs and sometimes you may get it with some tiny slices of the meat of your choice. You can have it with sour cream but I liked it without as it was very light and nourishing. I have to warn you it’s not for everyone… 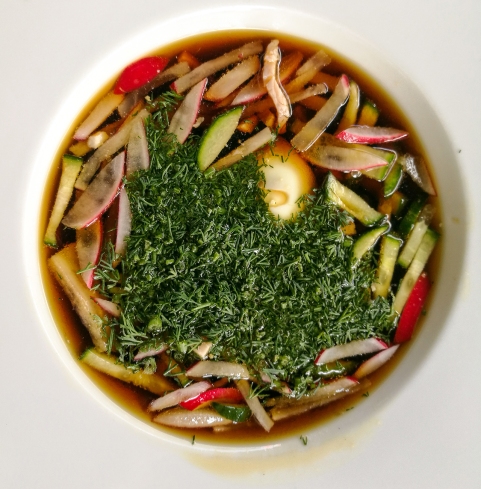 A cold soup based on raw veggies, boiled potatoes, eggs and tiny pieces of meat…

It’s a Georgian dumpling recipe but this is not the same thing, it just looks like it and maybe it’s the same dough recipe, just bigger and filled with potatoes and chicken… 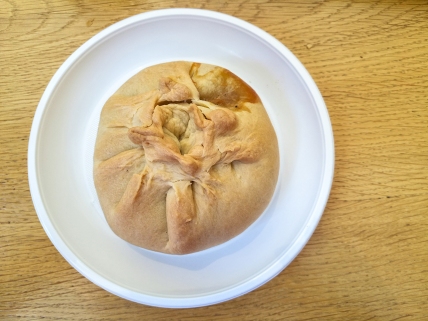 Stuffed with chicken and potatoes

Meat skewers of any kind, easy to nibble on the streets along with one of the delivious fried dough variety that you get filled with stuff. 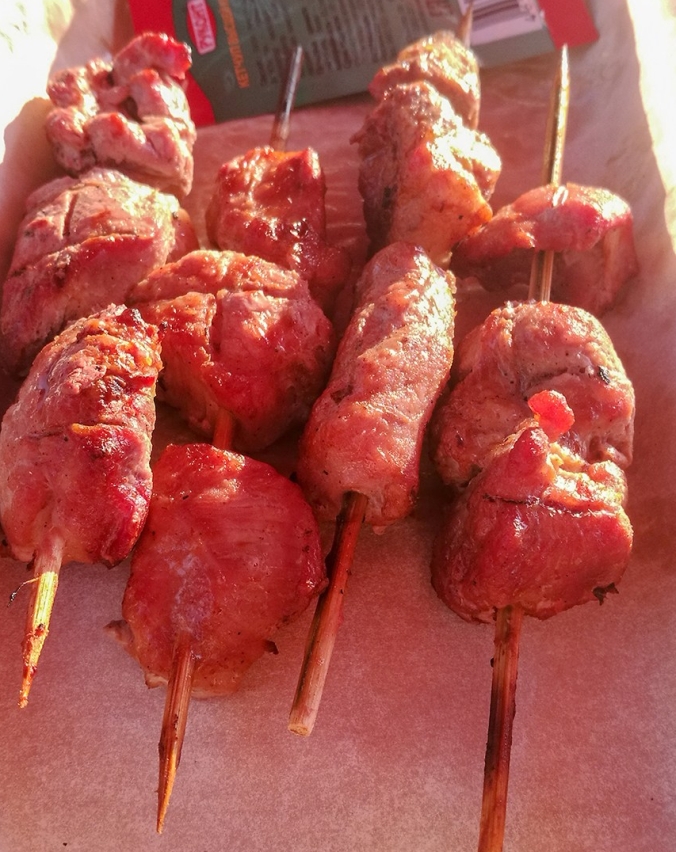 The difference is that the Pirog is the full sized pie and Pirozhki is the small version of it. These fried or baked pies are stuffed with a multitude of fillings such as spinach, cheese, meat and onions…etc. you’ll find it all over, in train stations, supermarkets, metro stations, among street vendors. And they are super delicious, except when you are up at 7 am pointing at something you don’t know to the vendor, and turns out to be a hot piece of fried dough full of raw meat and onions. Then it takes you the whole day to get over it.

This one was all cheese

There are other variations of course, like the Vatrushka, a baked pastry filled with sweet cottage cheese in the center…

Those are from ukranian origines, a small fried pancake or fritters based on sour milk or yoghurt and is usually served with sour cream (smetana). It’s a calorie bomb but super delicious, try it if you can and share with friends…

I found this gem in a marvel piece of interior design art or a supermarket called Yeeliseevskiy Gastronom; Some Oladyi and a sardine like fried fish…

A piece of heaven on a plate, that’s all…But if you are curious it’s a fried dough made with Tovorg or something like curd that can be also replaced with farmer’s cottage cheese served with jam or/and sour cream. The secret that it’s all creamy in and out… 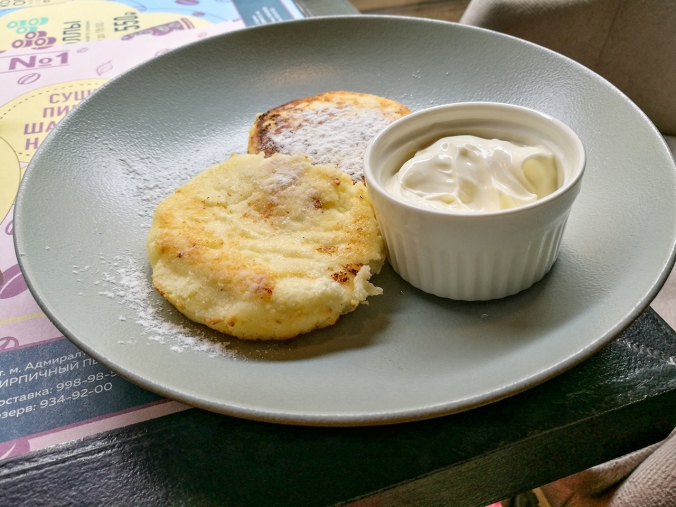 Try it if you want, it’s not my thing but it’s a rich meal in the morning. It can be a dessert also as it’s sweet and usually coupled with wild berries among other fruits.

It’s a russian pancake made of buckwheat, you can eat it anytime of the day coupled with any sort of filling like jam, cheese, cream, cold cuts, caviar and cooked meat for lunch. 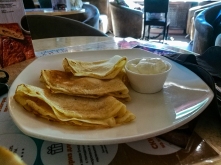 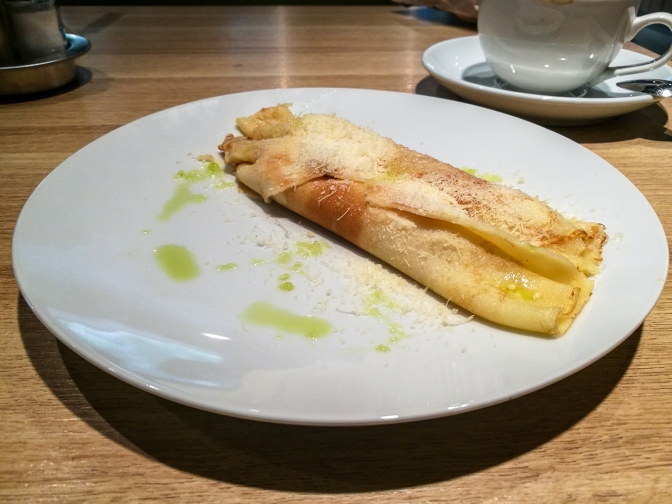 Ham and cheese for brunch

Sweet boiled corn that can be topped with salt or whatever fits your taste buds. I found it an energizing snack.

No words needed, except that it’s originally made of pork, but it’s not hard to find veal or beef based sausages…

The all famous potatoes, veggies and mayonnaise mix comes in a variety of garnishes and fillings but the base remains the same.

Thin dumplings filled with a variety of minced meats or a single type, comes in different shapes, has to be coupled with sour cream and it’s a delight to have…

There are large water surfaces surrounding and penetrating the mother land, that implies a good variety of fish and techniques to serve it. Summer is perfect for fresh fish that comes in a completely different variety than what I am used as a Mediterranean girl who is familiar with both Indian and Atlantic ocean varieties. But none of the fish I tried have failed to impress…

Worth mentioning that since they don’t fish all year round, they are also producing a large amount of dried fish that you can get ready packed as well. I highly recommend the dried squid or calamar…

Cutlets can be made of chicken, pork, veal, deer…etc. The russians have not retrained themselves from eating bears, boars, deers along with the casual assortment we are used to. So the first time, it was deer then I used to find chicken and veal cutlets in the train stations coupled with boiled or baked potatoes always…

It’s a dried porridge made with onions and maybe mushrooms  that tastes a bit like our koshary (rice and lentils) or the indian Dhal with rice…It’s a russian national dish not very common among tourists.

Buttered with onions and mushrooms…

The way russians treat the meat is supreme, don’t hesitate to try…

It’s essentially a honey cake with creamy layers of anything…

This one is filled with wild red fruits…

It’s not about the shape or size, the secret word is Tvorog… 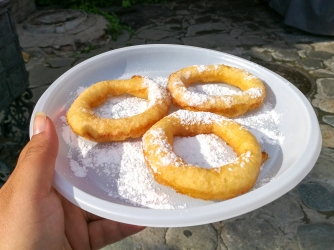 Russia is famous with its wild berries used in most sweet recipes and in a lot of cocktails recipes like the bellow mentioned Vodka Julep.

Fresh fruits and nuts stalls in Danilovsky market…Just grab some fruits and nibble on them on your way.

Of course Beer and Vodka, what else?

For some reason, all beers I’ve tried in Russia were smooth and light. Except for a few, most bars have their own special brew that I encourage you to try. You can always order a take out, they provide it in plastic cups or bottles if cups are not avaialble. So yes you can normally drink on the streets

Vodka is preferably gulped down cold in its original form. It’s not impossible to find coktails including the famous white russian (in the featured image).

They do not have wine, there is no room for vineyards in such weather, but they produce a variety of local brandy, cognac and scotch that I don’t recommend. There is plenty of vodka to try and herbal liquors.

It’s also worth mentioning that I’ve always had good coffee and I’d recommend you don’t miss out on Ivan’s tea pot.

It’s narrowing of me to recommend specific places, target the food, clientele and cleanliness according to your standards. The only thing you need to be careful with is where and how much will you drink alcohol?

Russian standard, Beluga and the Czar’s bottles are good souvenirs to bring home. Also make sure you buy some of those traditionally cured and smoked meats, as the way they do it is totally different even with sausages. I’ve tried plenty of different animals, loved the deer and boar as well as the bear assortments.

One thought on “The world cup diaries: Russian Cuisine…”

Writing on the world around us